NEWS: RO and TIRF announce details for Rugby in the Square 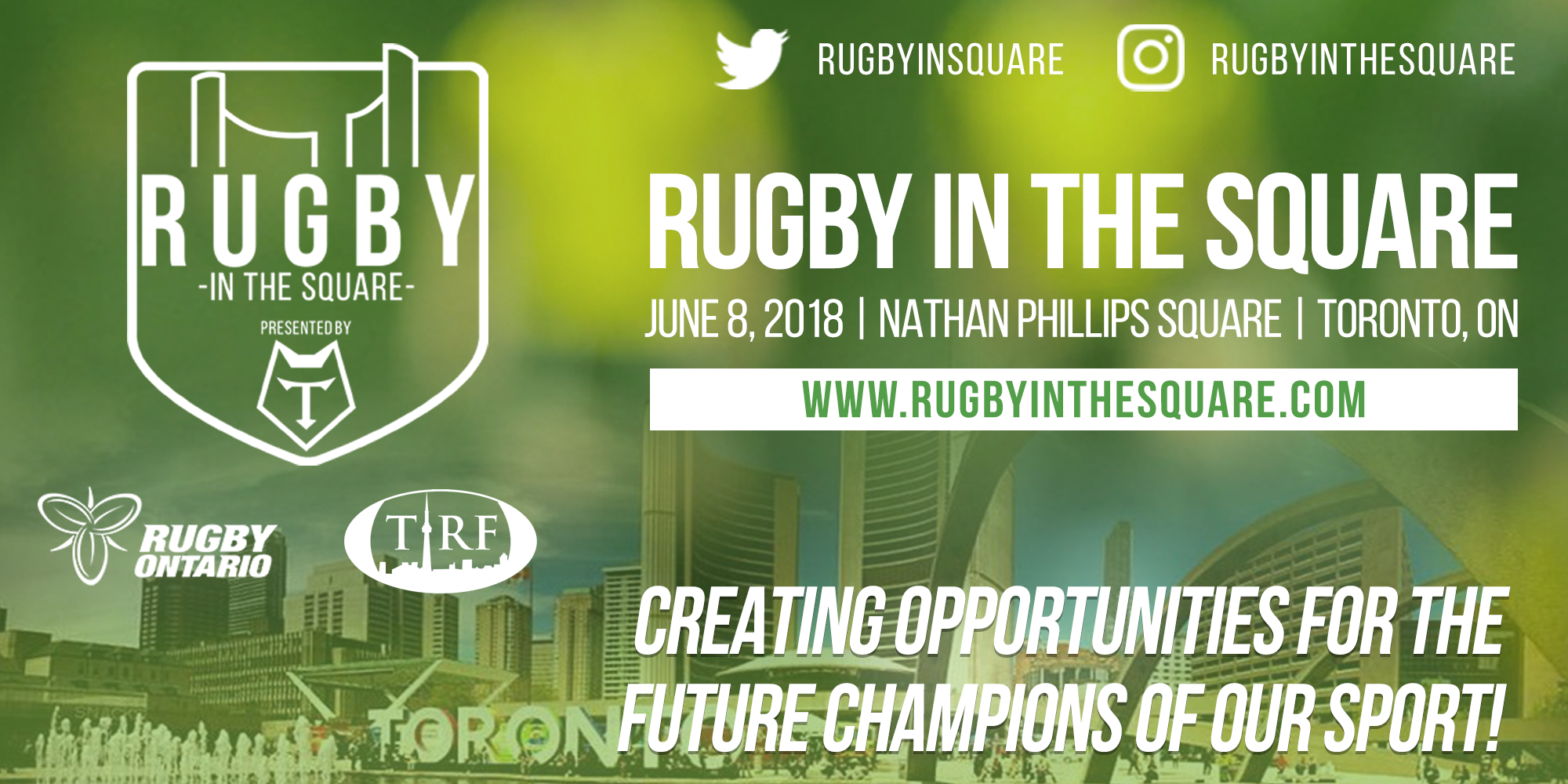 The iconic Nathan Phillips Square in front of Toronto City Hall will be transformed into an exciting full day festival of rugby on June 8, 2018 for 'Rugby in the Square presented by the Toronto Wolfpack'

(TORONTO, ON) – Rugby Ontario and the Toronto Inner-City Rugby Foundation (TIRF) are delighted to announce the debut of a signature fundraising event, Rugby in the Square presented by Toronto Wolfpack. The event will feature a five a-side Rugby Tournament for corporate teams from across the City alongside skill demonstrations, a mixed abilities rugby showcase and a range of fan activities.

This multi-stakeholder event will provide a platform for increased awareness about rugby programs in the province of Ontario, while raising funds to support future rugby champions. Rugby Ontario CEO Mike Brown said:

“We are extremely excited about this event. We know that we have a supportive and passionate rugby community, and this event gives members of that community the chance to support the future of our sport and attend a one-of-a-kind event.”

"Champions in sport are built by champions for sport," said Amanda Neale-Robinson, Interim Executive Director of Toronto Inner-City Rugby Foundation. "We are thrilled to be able to provide a platform for rugby enthusiasts, rugby-curious, and future-fans to explore, and experience, elements of the game in the heart of the city."

“We believe the world is a better place with more rugby balls in kids’ hands. This is a vision shared by Rugby Ontario and TIRF, which has brought our organisations closer together in the last 12 months.

“In working in partnership on events like this we can better engage the rugby community in Ontario, and work together to our ultimate goal of creating a global centre for rugby excellence in Toronto.”

Rugby in the Square’s Fast-Five Flag Rugby will combine skills from Rugby Union, Rugby League, Rugby 7’s and tag rugby. The event’s round-robin tournament invites 16 pre-registered teams to play a minimum of three 20-minute games on a combination of sport court and turf playing surfaces. The top four teams have the chance to compete for the tournament trophy and championship prize. Toronto Wolfpack players will feature on the day as the team heads into the heart of their season in Toronto.

An Après Rugby Reception features the trophy presentation alongside a silent auction and will take place at the nearby Quinn’s Steakhouse. In true rugby tradition all participating players will be invited to enjoy food and drinks together after the game.

Rugby in the Square also debuts and celebrates inclusivity with Canada’s first Mixed Abilities Rugby Showcase in partnership with the Abilities Centre. Participants of the Abilities Centre’s Thrive Program, take to the turf at 2:00pm to promote social inclusion, equitable access to healthy lifestyle choices and drive support for Canada to put forward a team in the Mixed Ability Rugby World Tournament in 2019.

This event is made possible by some of our great partners. The partners who are helping to support the cause are the Toronto Wolfpack, Aedelhard, the Abilities Centre, Branded Cities and the City of Toronto. If you are interested in supporting the event, please contact Joe Schissler at jschissler@rugbyontario.com for more information.

Toronto Inner-City Rugby Foundation (TIRF) is a rugby-centre community development organization that uses rugby as a tool for social good. TIRF, a registered non-profit founded in 2011, builds community through rugby in 31 of Toronto’s underserved neighbourhood improvement areas (NIA) and emerging neighbourhoods. TIRF, sanctioned by Rugby Canada and Rugby Ontario, works in partnership with more than 200 community partners. Through programming and services, TIRF reduces the financial, geographical, and cultural barriers that prevent children and youth from participating in sport.

Toronto Wolfpack are a professional Rugby League team dedicated to progressing through the RFL’s ranks, from League 1 to the Super League. They are the world’s first transatlantic major professional sports team.

The Wolfpack began their journey in 2017 winning the Kingstone Press League 1 title and promotion in their inaugural season. In 2018 the Wolfpack are competing in the Betfred Championship for the first time. The majority of their home games are held at Lamport Stadium, Toronto, aka “The Den”.