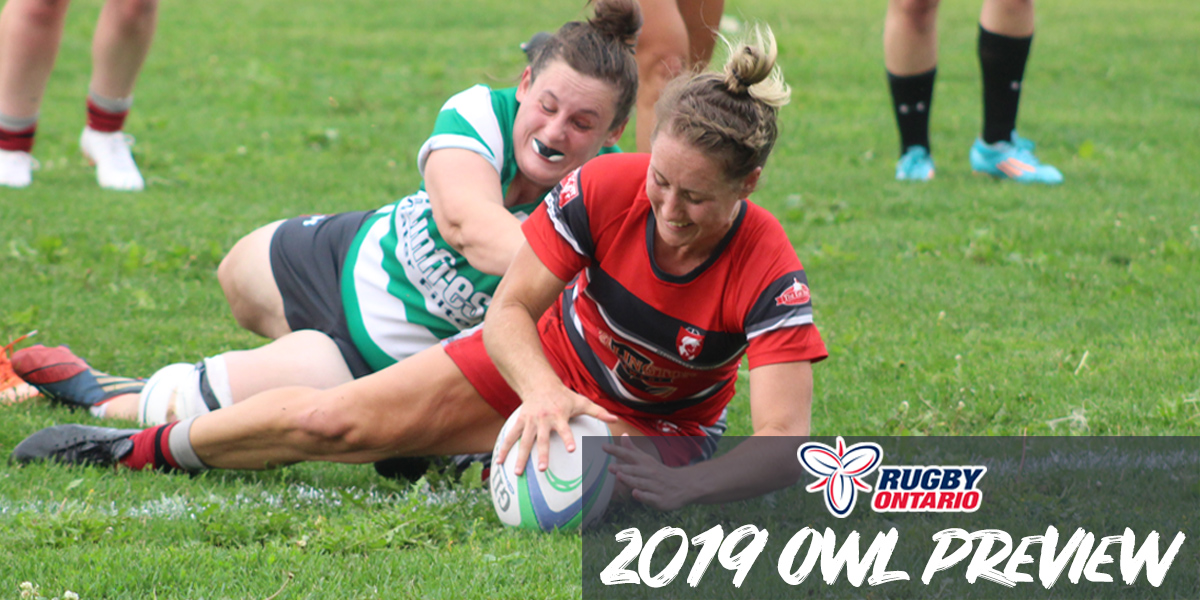 (WHITBY,ON)-  The 2019 OWL season is here! The Ontario Women’s League is the province’s top division of women’s club rugby. The league consists of eight clubs that are divided into two regional conferences: East and West.

At the end of the season, the top three clubs in each conference will qualify for the OWL Cup Playoffs. OWL Cup Day will be held on Saturday, August 19th, 2019 at Fletcher’s Fields in Markham.

The fourth-place team in each conference will enter the Provincial Women’s Intermediate Cup. This competition will see OWL teams participating against the top team from the Niagara Rugby Union and Toronto Rugby Union.  OWL clubs will participate in a regional home and away competition with the corresponding branch union opponent (OWL West v. NRU / OWL East v. TRU). The winners are decided based on an aggregate score and will earn sports in the OWL West and East divisions.

For more information on the OWL structure and to view the full league schedule, visit the OWL information page.

*Note: The Round 1 match between Niagara & Guelph has been rescheduled due to field conditions.

The Niagara Wasps finished 2nd in the OWL West Division in 2018. They posted a record of 6-3-1, earning 33 points. The Wasps were a tough side to beat at home. Three of their six victories came on their home field, including a 62-31 victory over their Round 1 opponents, the Guelph Redcoats. The club qualified for the OWL Cup, losing to the 2018 OWL Cup Champions, Toronto Saracens, in the Semi-Final.

Guelph were the top club in the OWL West Division in 2018 with 42 points. The Redcoats made it all the way to the OWL Cup Finals, losing in the final match of the season to the Toronto Saracens 46-36. The Redcoats split their season series with the Wasps in 2018 going 1-1.

The Toronto Nomads competed in the OWL West Division in 2018, finishing 3rd with 19 points. The Nomads ended their 2018 campaign on a high, winning their last two matches. They did play the Saracens once last year, with the Saracens coming out on top. The Nomads move into the OWL East Division in an effort to further regionalize the Ontario Women’s League.

The Saracens will look to win their third straight OWL Cup title in 2019. Last year, the club defeated the Guelph Redcoats 46-36 to repeat as OWL Cup Champions. The Saracens went 9-1-0 during the regular season, accumulating 45 points along the way. The clubs only loss came against the Aurora Barbarians in their last match of the regular season.

The Toronto Scottish were one of the top four teams in the OWL in 2018. The Club finished 3rd in the West Division with 26 points. They will host the Aurora Barbarians in Round 1, a club that finished 2nd in the East Division last year.

The Aurora Barbarians 2018 season came to an end in the OWL Cup Semi-Final. They were edged by the Guelph Redcoats 48-47 in a match that saw a combined 15 tries. The Barbs will look to replicate their regular season success from 2018. Aurora went 7-3-0, good enough for 39 points. The Barbs lead the entire OWL with 11 bonus points.

*Note: The Round 1 match between Crusaders & Brantford has been rescheduled due to field closures. It will be played on June 8th

The Crusaders Rugby Club and Brantford Harlequins will be making their Ontario Women League (OWL) debuts in 2019. The teams will compete in the OWL West Division against the Niagara Wasps and the Guelph Redcoats.

The Crusaders competed in the Toronto Rugby Union McKenna Division in 2018. They went 10-0-0 during the regular season, earning a bonus point in all ten matches for a season total of 50 points.

As for the Harlequins, they earned promotion from the Niagara Rugby Union Women’s A Division. Brantford went 9-0-1 during the regular season, earning 48 points along the way. In the OWL Intermediate Cup, they defeated Waterloo County in a two-leg series to secure a birth in the Ontario Women’s League.