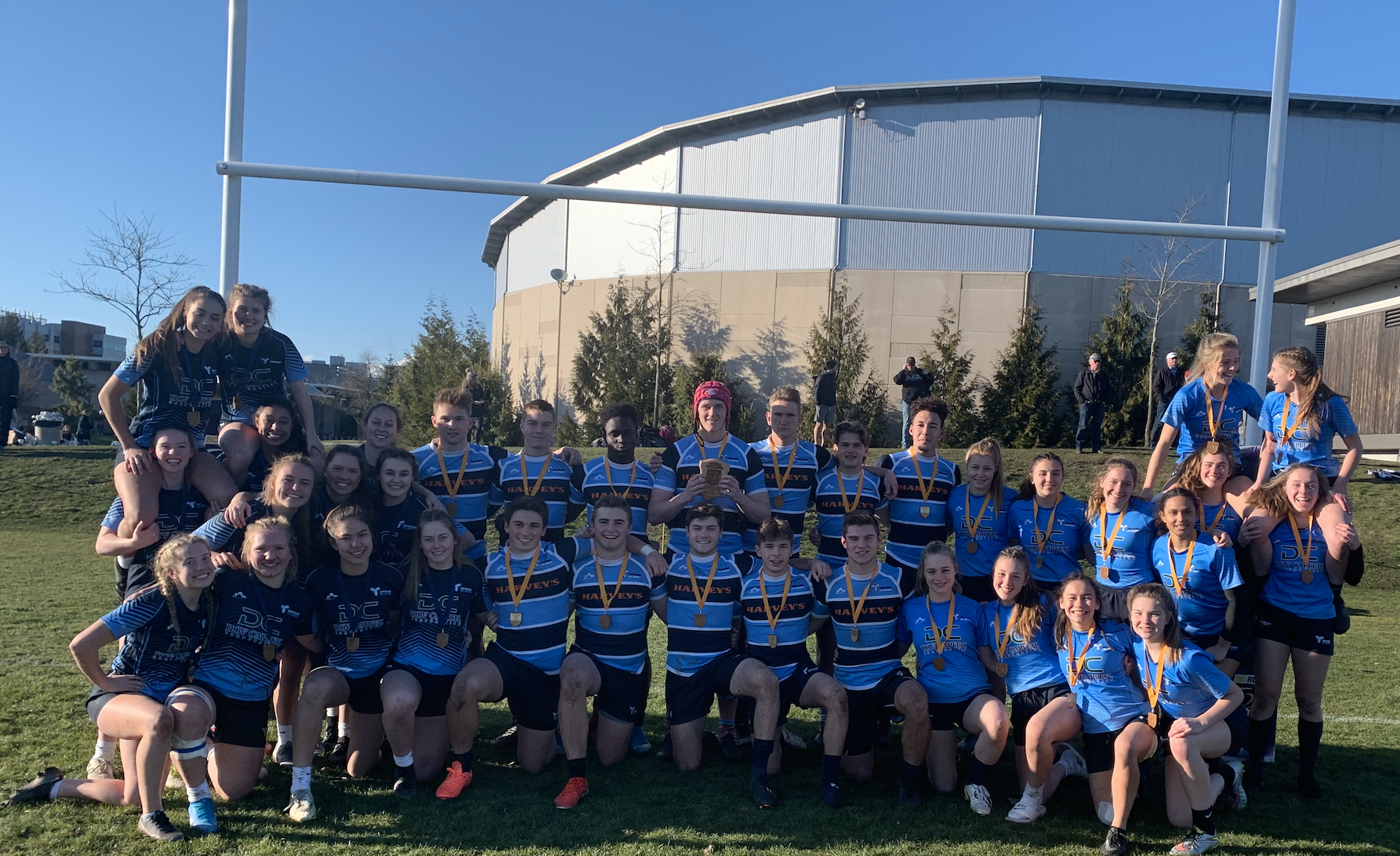 (WHITBY, ON) - The Ontario Jr. Blues 7s Program had a very successful weekend at the Vancouver Sevens Invitational, which took place at the University of British Columbia from March 5th to 8th. The U18 Boys & U16 Girls teams both won the Gold Medal in the respective divisions. The U18 Girls also brought home some hardware, winning the Bronze Medal in their division.

“The Vancouver Sevens Invitational was a very successful event for the RO7s program on so many levels” said Khalil Ajram, Rugby Ontario’s Sevens Program lead. “All three teams improved game in and game out, specifically on the defensive side of the ball. It was wonderful to watch.”

The U18 Boys went undefeated through pool play, racking up four straight victories. They earned top spot in Pool A and secured a birth in the U18 division final against B.C. Mainland. In the final, the Jr. Blues executed their attack to perfection, defeating BC Mainland 33-0 to win the U18 Boys Division Cup.

The U16 Girls were also dominant during the pool stage. They went 3-0 and did not concede a try in any of their pool matches. After defeating Edmonton Gold in the Semi-Final round, the Jr. Blues faced off against BC Gold in the final. The U16 Girls continued their dominance in the Gold Medal match, defeating BC Gold 37-5 to win the Gold Medal match.

U18 Girls went 2-1 during the pool stage of the tournament, dropping their opening match to the Rugby Canada Development Academy. They finished second in their pool and earned a spot in the Semi-Final against a tough BC Gold side. In a tough fought match, BC Gold managed to pull out a 24-12 win, putting the Jr. Blues in the Bronze Medal match. The U18 Girls bounced back from their semi-final defeat, beating Edmonton Gold 29-12 to win the Bronze Medal.

Following the tournament, the players, coaches and managers attended the Saturday of the HSBC Canada Sevens event, which saw Canada go 3-0 in pool play. Canada went on to finish 3rd, their first podium finish on home soil.

Congratulations to all three teams on a fantastic tournament. Thank you to Sonny Raina (U18 Boys HC), Darrell Devine (U18 Girls HC), Nick Daniels (U16 Girls HC) and Ian Fitzgerald (Girls Program lead) for all their hard work. Thank you also to team managers TK Rewi and Sara Scott for keeping the players focused and organized. Thank you also to Sportside trainers Sasha Kulesh and Malik Carbey-Corbett for tending to the athletes.

Next up, the Jr.Blues Program will send four teams to the Tropical 7s, which will take place in Orlando from April 10th - 11th.