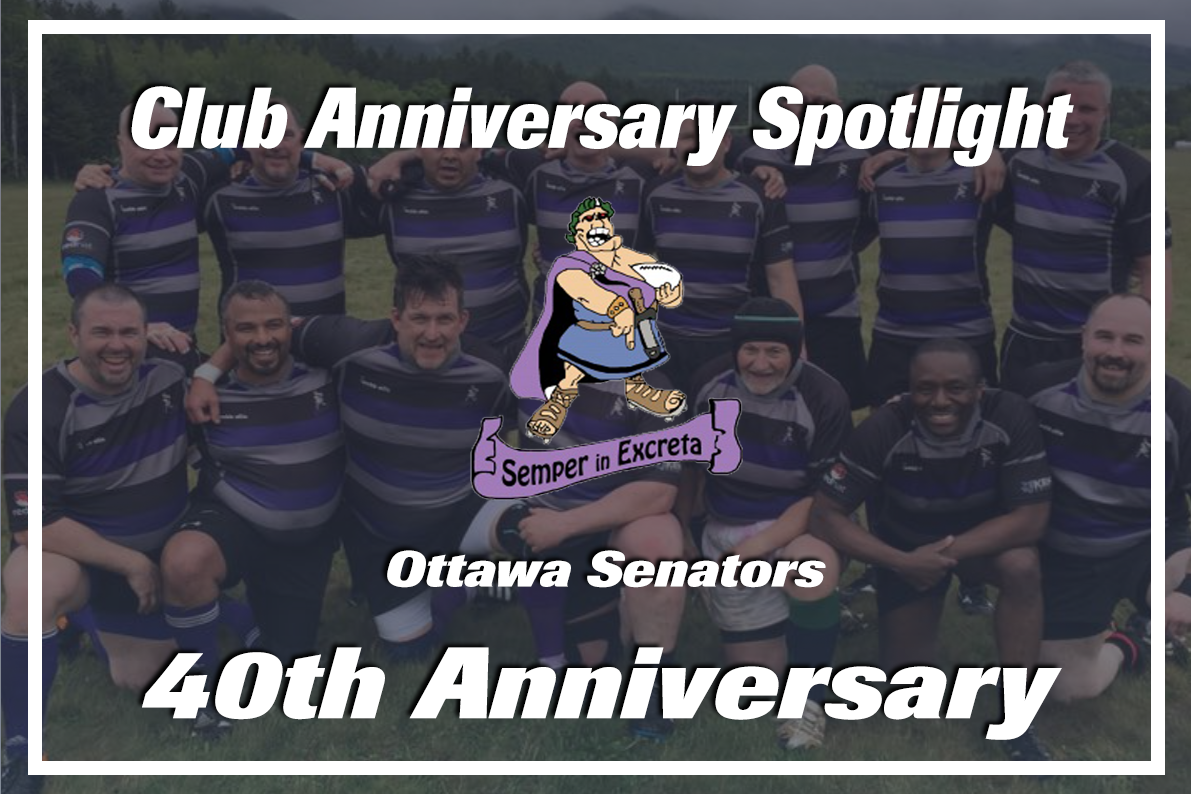 (WHITBY, ON) - The Club Anniversary Spotlight Series is a initiative which will recognize all Rugby Ontario Member Clubs that are celebrating a major anniversary during 2021. Next up is the Ottawa Senators Rugby Club, who are celebrating their 40th Anniversary!

The Ottawa Senators RFC is exclusively a 35-and-older Senior Men’s club (Masters).The Senators founders met in Con Sheehan's living room in the Fall of 1981 and decided to field a rugby team/club of players 40 years and over. It was also decided that two players would be allowed to play with the club who were between the age of 35-40. The Senators’ first playing season was 1982, and the playing strip was a checkerboard brown and white shirt which was quite ugly to behold. The strip changed to purple in 1983 or 1984. The club is also quick to note, for any litigious folks, that it chose its name well before the local ice hockey revived it for their own purposes.

The Senators have always been a side that focuses on comrodery and the spirit of rugby, living the motto of “Stay in the Game.” The club encourages and recruits players from the Ottawa area who may have graduated from Senior Men’s rugby, as well as newcomers to the city or even to the sport. Through the Senators, players can truly become part of the unique old boys rugby community, at home and internationally.

The Senators played their first international match in 1982 at Randall's Island, in the middle of the East River, versus The Gentlemen of New York R.F.C. The match was played on a football field strewn with broken glass and debris. The Senators could not afford a proper tour bus to New York so instead the 15 or so players got a yellow school bus and travelled the distance to Manhattan.

A subsequent Senators trip to New York in 1984 was a memorable one. There was a full complement of 22 players and a few supporters to journey down to Manhattan to play the rival Gentlemen of New York R.F.C. The match was played at the Westchester Yacht Club's rugby pitch. The Saturday night tour was seriously delayed as 12 or so Senators rushed on to the Tudor hotel elevator in the lobby. The elevator door closed, and the elevator promptly sank about 2 feet under. The elevator was stuck, and the fire department had to be called. The trapped players were finally rescued late in the evening.

The success of that tour encouraged the growth of old boys rugby in the National Capital area and helped solidify the Senators as a club, bringing together rugby enthusiasts from Canada, the United States, the United Kingdom and other great rugby nations who all found themselves living in Ottawa and missing the game in their days following their 35th birthdays.

Currently, the Senators have spring and fall fixtures against other over-35 clubs within Eastern Ontario, and will frequently travel further afield, should the opportunity arise. The Senators are currently the holders of the St. Lawrence Cup, awarded to the victors of annual matches with the Syracuse Chargers RFC in upstate New York, The club makes a yearly trip to the Old Men of the Mountain rugby festival in Franconia, New Hampshire every June, as well as semi-regular entries into the Can-Am Rugby Tournament in Lake Placid, New York, and occasional tours to other special destinations. If your club has 15 or more men who are willing to have a game – and enjoy the festivities that surround it – the Senators will see you on the pitch.