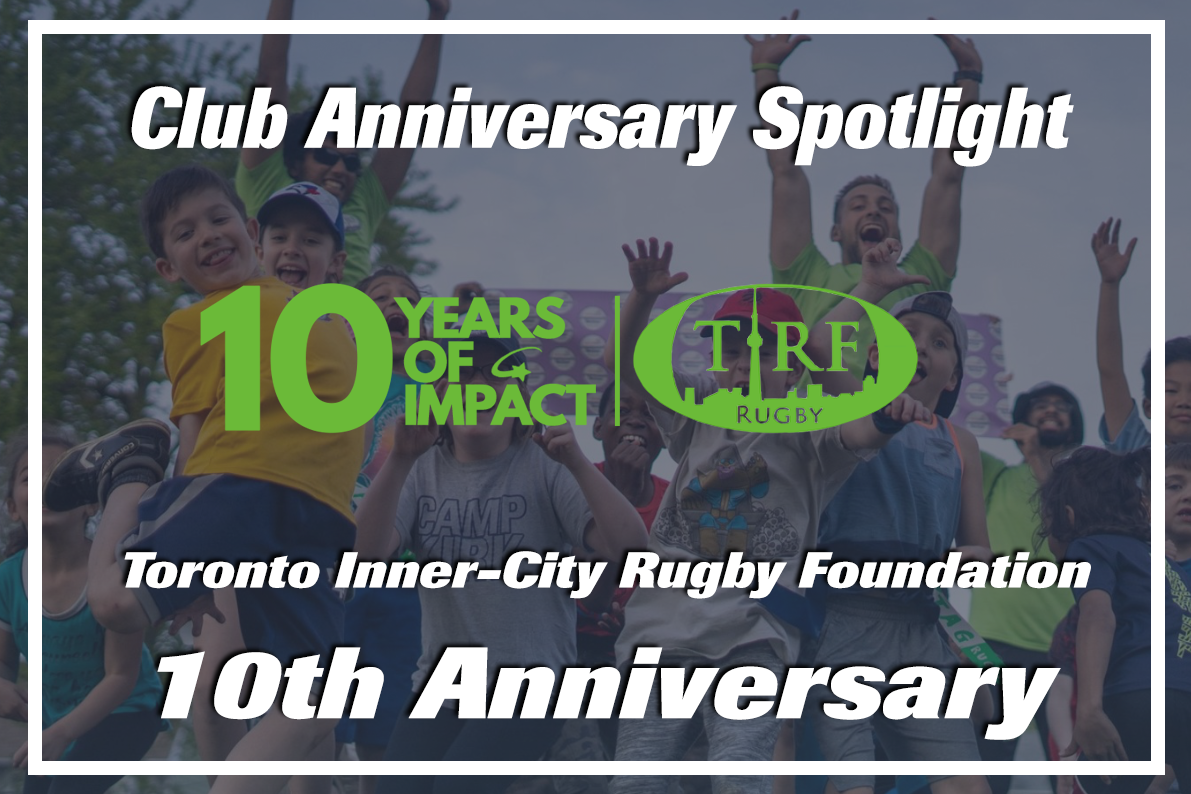 (WHITBY, ON) - The Club Anniversary Spotlight Series is a initiative which will recognize all Rugby Ontario Member Clubs that are celebrating a major anniversary during 2021. Next up is the Toronto Inner-City Rugby Foundation, celebrating their 10th anniversary!

2011: Foundation: The Demonstration Year. TIRF started out as a demonstration project spearheaded by co-founders, Alan Broadbent; Bill Di Nardo; Scott Bryant: and Chris Rideout. TIRF saw initial signs of success in its first school and club pairing with Newtonbook Secondary School and Toronto Saracens. With academy style coaching taking place throughout winter and into the school season, the school experienced success on the field and the club registered a new pool of male players.

2013: Growth: The Pilot Year. By the end of this year 299 youth, hailing from 28 different TDSB and TCDSB schools, became registered members of TIRF. Increased participation rates were not only the result of more schools being engaged, but by also supporting girls in the sport. With the addition of the Yeomen Lions all female rugby club, TIRF supported a pathway for 75 female athletes to join and experience club rugby.

2014 - 2017: Investment: Capitalizing On Success. A substantial injection of multi-year funding from the Ontario Trillium Foundation, gave TIRF the opportunity to train coaches, hire Paul Myers as TIRF's rugby development coordinator.  TIRF began expanding it's program offerings including the introduction of TIRF House Leagues and Community Rugby Programming which introduced 3,500 children to the game in its first year and grew to supporting more than 27,000 children by the end of 2017.

With an investment in top-tier rugby talent, TIRF began offering an even more program first at this time. TIRF became the first rugby club to successfully apply for and be awarded five (5) Canada Summer Jobs grants - a real game changer that not only impacted the reach of TIRF's programs. but also provided additional opportunities for the young people it served. TIRF launched the Doncaster Scholarship, a multi-year post secondary scholarship award, funded by The Doncaster Foundation. So impressed with the applicants during that initial year, TIRF also started the Eventi-Webb Scholarship Award, an annual one-time award for supporting student-athletes.

2014 was the year that TIRF became the first club, outside of Rugby Ontario, to offer indoor winter training sessions. From that initiative. TIRF started it's signature Pre-for-Rep training program for any youth in the city who wanted to be connected to quality coaching, elite programming under the support of U16 and U18 coaches in the Rugby Ontario system, but were unable to participate in the provincial academy training program. Continuing to find and address gaps in the pathway for inner-city youth, TIRF launched it's March Break Camp and Youth Tournament which saw 130 participants in its inaugural year and 300 participants in 2015.

TIRF was able to ride the growing momentum behind the organization and continued to have success both on-and-off the pitch. First by winning the Beaconsfield's 7s in back-to-back years coached by Jeremy Cairney and Riley Di Nardo; and also by stepping into the role of tournament planning. 2015 was the beginning of the TIRF Fall 7s, a staple stop on Rugby Ontario's Magnificent 7s Tour. 160 youth participated in the inaugural year at Sunnybrook Park. The Career Connect program welcomed 12 participants and Canada Summers Jobs youth doubled to 10. Samiah Kamel was an integral member of the small core team, managing communications and supporting the growing needs of the Community Rugby Program.

Three notable moments happened in 2016. The first came when TIRF alumnus, then eighteen-year-old, Josiah Morra took to the pitch for the World Rugby Sevens Series in Cape Town and scored his first try assisted by the legendary John Moonlight. The second was when TIRF's U18 mens team placed 5th at the NY 7s and the third was when Bill Di Nardo stepped away from executive director responsibilities. Bill moved onto TIRF's board of directors, while Ige Egal, after a proven track record of program excellence, was promoted to TIRF's executive director.

By the end of 2017, TIRF had increased not only its seasonal youth workforce to 50 young people all between the ages of 15 to 24, but also its full-time staffing complement adding three new permanent positions and a part-time position to the team. In that year alone, TIRF engaged 201 school and community partners over a four month window; registered 200 children in free flag rugby house leagues located in NIA's across the city; had 50 regular Rising Stars participants; 250 youth members; distributed 25 player bursaries for exceptional athletes, trained 69 folks in how to deliver Rookie Rugby. TIRF discovered new partners and was the first of the rugby clubs to use the National Sport Trust Fund as a fundraising vehicle.

In the spring of 2018, there were staffing changes as part of TIRF's full-time team and Amanda Neale-Robinson, formally TIRF's communications officer, was promoted to an interim executive director position. That same year, TIRF was awarded a Healthy Active Kids Micro-Grant along with Heritage Canada awarding TIRF with multi-year funding to address pluralism and multiculturalism in sport. That kicked off a three year project where TIRF tested, drafted, and piloted it's activity-based toolkit and train-the-trainer program called Everyone's Game: How to Build Safe, Welcoming, Inclusive Spaces for Young People to Access Sport.

In 2019, the heartbeat of TIRF and the confidant and champion of so many young people, Paul Myers, retired, leaving mighty big cleats for the organization to fill. Arielle Dubisette-Borrice, Linda Manzo, and Kristin Bonomo offered quality coaching and support the fall sevens season and TIRF's U18 women's team while Cassie Collins jumped in as TIRF's new Program Manager. The 5th Annual TIRF's Fall 7s had outgrown its space at Sunnybrook Park and moved to Fletcher's Fields where in 2019, the TIRF Fall 7s hosted more than 700 youth participants from across the province over the two day tournament.

2020 was a year of best-laid plans disrupted by COVID-19. TIRF pivoted its programming and, while hopeful for a swift return to in-person programming, began testing out a virtual program curriculum. By early 2021, TIRF had refined its online offering and began a partnership with the CDSB's virtual school program, serving 5,000 children in the first half of the year. TIRF began piloting a Coach Mentorship Program, aimed at providing young people the certifications required to be World Rugby Level One coach, with opportunities for hands-on training and creating a network of future-coaching staff.

Supported from the Ontario Ministry of Heritage, Sport, Tourism and Culture Industries, TIRF was able to bring on accomplished rugby coach, Spencer Robinson, onto the team as the Diversity, Equity and Inclusion (DEI) Coach of Youth Rugby & Belonging.

TIRF will continue to ground its programming in the delivery of Everyone's Game as part of building up future sport leaders. With that ethos in mind, TIRF will be expanding the Coach Mentorship Program with lofty goals of being the largest organization in the country to train and have youth certified as World Rugby Level One coaches. Ultimately, creating an infrastructure for meaningful youth employment and connecting young people to schools in their communities. This summer, TIRF will be testing out a sport leadership program called TIRF Leaders In Training. It combines wellness principals, leadership and teamwork workshops, and teaches high-school aged youth how to support the delivery of non-contact flag rugby curriculum in their communities. Later this year, TIRF will be launching its Rugby-to-Reading program in two communities to increase both physical activities levels and literacy comprehension. With London Ontario scheduled to host the Canada Summer Games in 2024, TIRF intends to recruit, steward and train promising athletic talent to join those teams, however, not before TIRF the successful pursuit of securing its charitable status.

In 10 years, TIRF has been the embodiment of Kaizen: the Japanese philosophy of continuous improvement. Responsive. Full of grit and character. TIRF, and its legacy, are in the young people who we treasure so much. The ones we know who are changing the world, or just their little corner of it.