Rugby Ontario and Abilities Centre Host All In Rugby Cup 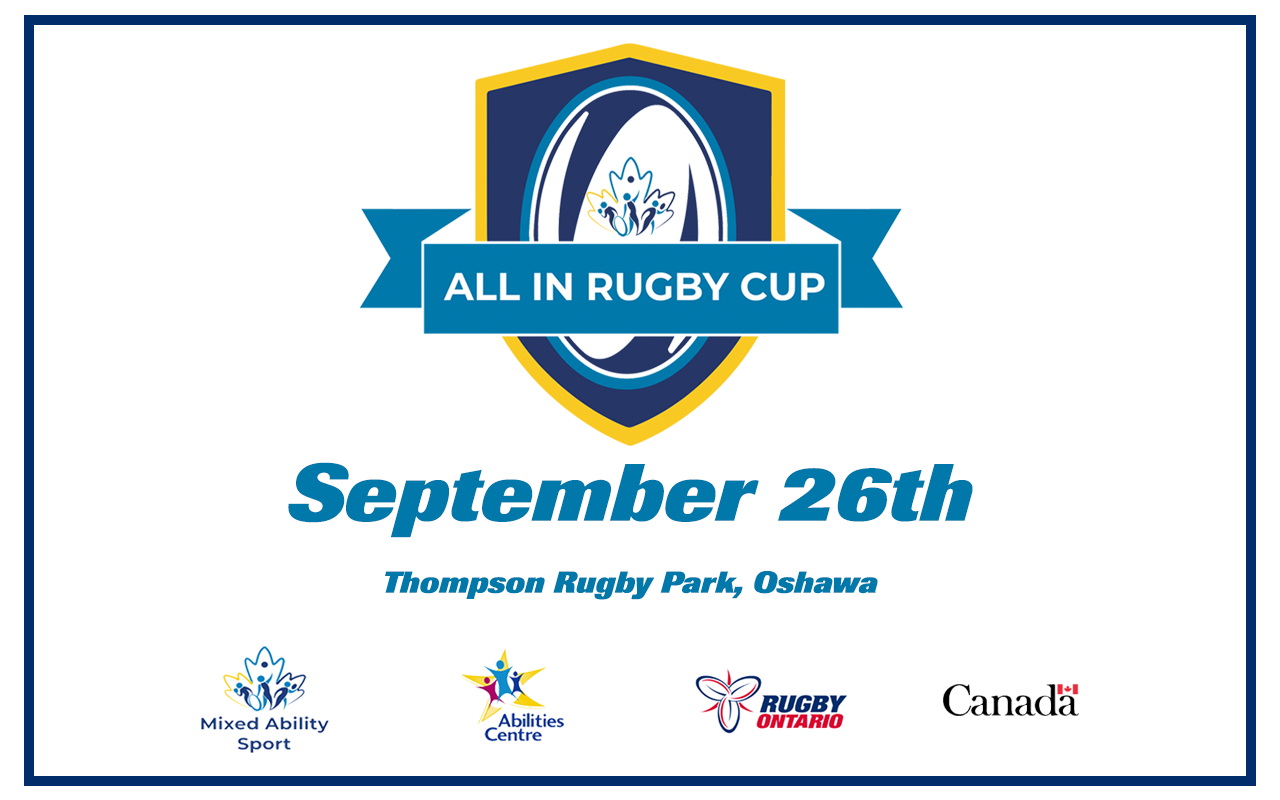 Rugby Ontario and Abilities Centre Host All In Rugby Cup

(WHITBY, ON) - Abilities Centre, in partnership with Rugby Ontario, is proud to host the All In Rugby Cup, Canada’s first Mixed Ability Rugby Tournament on Sunday September 26, 2021 at Thompson Park in Oshawa starting at 10:00am. Mixed Ability Sport aims to radically change the way we think of, join in, and enjoy sports by welcoming players of all ages, abilities, backgrounds and experiences into mainstream sport settings together, playing non-adapted sports.

The Mixed Ability model was first developed through rugby in Bradford, U.K. in 2012, where it grew organically from a lack of provision for people with disabilities to play full-contact rugby. Lead by International Mixed Ability Sport, the model has grown on a global scale and was introduced in Canada by Abilities Centre in February 2020.

Over the past year, with support from Rugby Ontario, four rugby clubs in Ontario have begun to offer Mixed Ability Rugby within their community. The Oshawa Vikings were the first rugby club to initiate programming with Abilities Centre and Rugby Ontario in January 2020 developing key learnings for provincial growth. Through funding support from the Sport Canada Innovation Initiative, the Muddy York Rugby Club (in collaboration with the Toronto Lions), Burlington Centaurs Rugby Club and London St. George’s Rugby Club joined the movement and launched Mixed Ability Rugby teams within their clubs in the spring of 2021. Each club has been following Flag Rugby rules over the course of the summer, paving the way for full contact competition in the future.

“Mixed Ability Rugby is another way to showcase the culture, values, and inclusivity of our sport,” said Myles Spencer, CEO of Rugby Ontario.  “It has created more opportunity for participation, as anyone with a desire to play the game of rugby is welcome, regardless of experience, skill and ability.  The impact of the program has been felt by the athletes, coaches, and the clubs themselves, with members expressing a change in the overall culture of their club and community.”

“Our vision is to breakdown barriers and create equitable access to sport for all members of our community”, says Stuart McReynolds, President & CEO of Abilities Centre. “Mixed Ability Sport provides an innovative approach to breaking down these barriers and through the power of sport we have a vehicle to drive broader social inclusion in communities across Canada.”

In addition to rugby, Abilities Centre is continuing the growth of Mixed Ability Sport through work with coaches and organizations from across Canada representing the sports of pickleball, ringette, curling, archery, boxing and artistic swim.