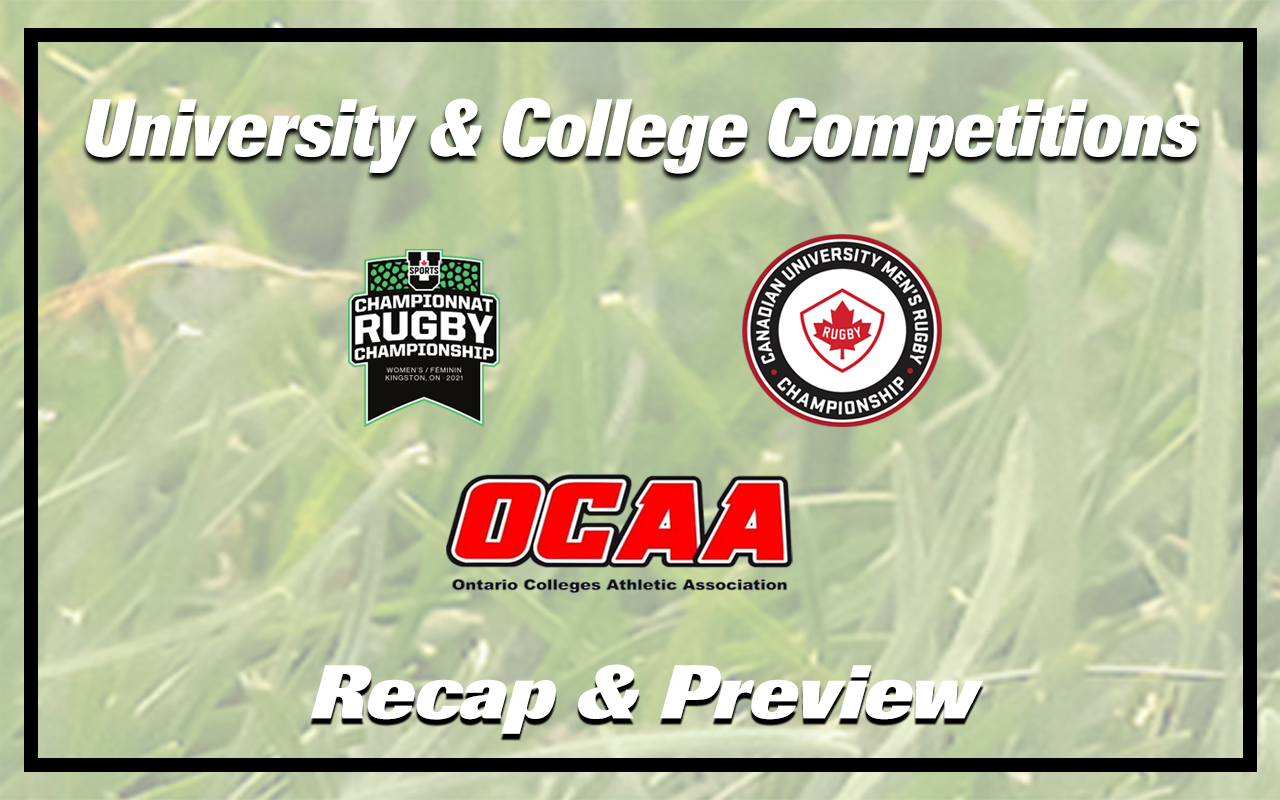 (WHITBY, ON) - The Ontario University and Collegiate Rugby seasons are coming to a close. Both the OUA and OCAA Women’s Champions have been crowned. On the Men’s side, the OUA Men’s champions has already been decided while the OCAA championship match will take place on Saturday, November 13th, 2021. Read below for a recap of all four leagues and for information on the National Championship Tournaments.

On October 30th, The Humber Hawks won the OCAA Women's Rugby Sevens championship, defeating the Durham Lords 36-14 in the championship match at Thompson Rugby Park in Oshawa. It was the fourth time the Hawks have been crowned champions since women’s rugby sevens became an official OCAA sport back in 2016.

The Hawks had lost to the Lords during their regular season meeting by a score of 17-12. However, the Hawks were able to avenge that loss and capture their third-straight title. Congratulations to the Humber Hawks on another fantastic season!

To view the full results from the OCAA Women’s Rugby season, click here.

The St. Lawrence Surge defeated the Georgian Grizzles 13-7 to capture the OCAA Men's Rugby Championship. It was the first gold medal in Men's rugby for St. Lawrence. It also marked the second straight year the Grizzles have won the silver medal. The match was played on a cold and wet day, resulting in a muddy playing field that both teams had to deal with. At the half, the Surge held a 6-0 lead, courtesy of two penalty kicks. After the Surge took at 13-0 lead, the Grizzles scored their first try of the day to close the gap to 6. The final minutes featured a strong push by the Grizzles, but ultimately fell short. Congratulations to St. Lawrence on the Gold Medal win and a fantastic season!

To view the full results from the OCAA Men’s Rugby season, click here.

Queen’s held the lead for majority of the first half, but two tries as the half was winding down gave Guelph a 15-13 edge. In the second half, it was more of the same from the Gryphons. Guelph scored three unanswered tries to build a 14-point lead. They held on to win the game, capturing the OUA title for the fourth time in five seasons. Congratulations to Guelph on their OUA Championship!

The Queen's Golden Gaels defeated the Ottawa Gee-Gees 26-18 to capture the USports Women's Rugby National Championship. The title was the first National Championship for the Queen's Women's rugby program.The final was a well played match, with both teams evenly matched. At half-time, the teams were deadlocked 15-15. In the second half, the Gaels pulled away thanks to the kicking of tournament MVP Sophie De Goede. In the end, the Gaels outlasted their Provincial rivals to win the National title. In the Bronze Medal match, the Laval Rouge et Or defeated the University of Victoria Vikes 32-26. The Bronze Medal was the third medal Laval has won in the last four tournaments. They won a gold in 2019 and a Silver medal in 2017.

The Gryphons dominated the first half, giving them a 22-7 lead after 40 minutes of play. However, the defending Champions would not go away. The Gaels scored three unanswered tries late in the second half to close the gap, but it wasn’t enough. The Guelph Gryphons would hold on to win 37-28, finishing the OUA season a perfect 6-0.

Guelph and Queen’s will both participate in the Canadian University Men’s Rugby Championship.

The 2021 Canadian University Men's Rugby Championship will be held in Kingston. The competition will run from Wednesday, November 24th to Sunday November 28th.  The event features the top eight teams from around the country, competing for the National title. The Day one schedule can be found below