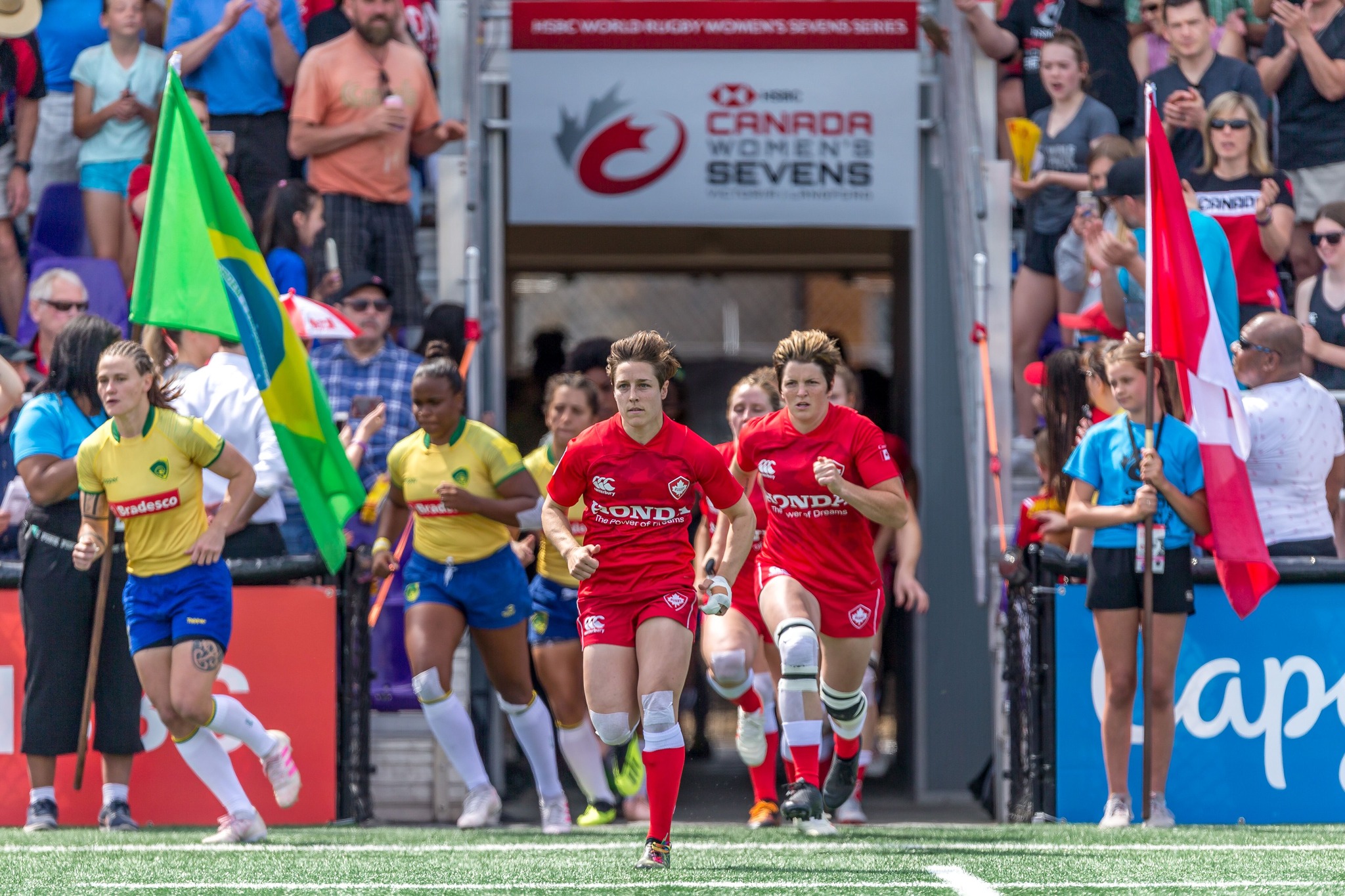 (WHITBY, ON) - After a decade of representing Canada in rugby, Ghislaine Landry called it a career on November 18th, 2021. Ghislaine began her career playing for the Toronto Scottish and Rugby Ontario. She went on to play University rugby for St. Francis Xavier University for four years, after which she moved on to play for the Senior Women’s National team.

The 33-year-old from Toronto retires as the all-time leading point scorer in the World Rugby Sevens Series, amassing 1,356 points over the course of her career. Ghislaine helped Canada win a Silver Medal at the 2013 Sevens World Cup, a Gold Medal at the 2015 Pan-American Games, and a Bronze Medal at the 2016 Olympics in Rio. Rugby Ontario spoke with Ghislaine a few weeks after her announcement to learn what lead to her decision, reflect on her career and hear about her next steps.

Q: Congratulations on a fantastic career! I am sure the last few weeks have been very hectic for you. What lead to you making the decision to retire from rugby?

GL: The timing felt right for me. I’ve spent a lot of time away from home and we just welcomed a baby daughter. Being able to be home over the next little while and spend time with her and my wife is really important to me.

On the rugby side, it also felt like the right time. I’ve been at this a long time and my body was talking to me. There are a lot of up-and-coming players that I am excited to watch take over the program and take this team to the next level. I am pretty grateful that I go to make this decision on my own and in my own timing.

Q: What do you think you will miss most about playing?

GL: I have been watching some of the rugby lately and there are moments when I miss being out there. You know being on tour with the team and travelling the world as part of your job is a lot of fun, so I will miss that. I will also miss the training aspect. I fell in love with the process of continually trying to get better, I will miss that. I am however excited to apply that to other aspects of my life. Even watching the Dubai 7s, there were a few moments of missing it but also moments of pure content with my decision.

Q: What made you fall in love with rugby when you first began playing?

GL: You know it’s pretty crazy, when I started, none of what I achieved was even on the table. So for me it was the game itself and the people. I had played a lot of other sports growing up, but once I started playing rugby and got into the club culture and played for a few teams, I realized the difference between rugby and other sports and fell in love with it. I love how dynamic the game is, how many different skills you need to be successful. I love trying to get better at each skill. We all have our job on the field, but I love how everyone has to fit together to form a good team.

Q: You mentioned none of the stuff was on the table, as you were going through what made you want to continue playing? What was the motivation?

GL: There really wasn’t even a pathway at that point either. My timing was pretty lucky if you look back. I played club, I played high school and provincial rugby, then I went to University and played. After that, I went to England and played for a year and that’s when the Canada program centralized. I was just really fortunate it happened at that time. Step by step, I just loved rugby and kept playing. I loved what I was learning and I was having success. Year after year, the scene changed, and I kept just going for it. I was really lucky with the timing.

Q: In previous interviews, you mentioned growing up some people felt you were too small to play Senior rugby. When did you realize that you could play for the National team and be an impactful play at that level?

GL: Playing for the National team and going to a World Cup was always the goal back then. I got my name into the mix when I was pretty young, and pretty small. It was attainable, I was always really close, but I wasn’t getting that final selection. I was still playing a lot of rugby at that time and still really enjoying it. So, although I wasn’t getting selected for the Senior National team, I was still enjoying what I was doing. It came down to “am I just doing this to play for the National team, or is there more to this?” and for me there was always more to it. Whether I was playing club or University, I was just enjoying playing so much and seeing how good I could get.

Q: You have accomplished so much in your career. What are some of the achievements that stand out to you?

GL: Winning the Silver Medal at the World Cup was a big one. It cemented for us that we were one of the top teams in the world. It was also the first World Cup medal a Canadian team had ever won, so that was a significant moment.

Playing in the 2015 Pan-American Games in Toronto was personally a big moment. I had 50 family members there to to watch, obviously being from Toronto, normally my family has to watch me at 3am on a stream, so to be able to play and win a gold medal in front of my family, was special. Then of course, playing in two Olympic Games is a huge honour and something I will never forget.

Q: You have been one of the faces of Canadian Women’s Rugby for the last decade and have helped to grow the women’s game in Canada. What does it mean to you to have inspired so many young female athletes to begin playing Rugby?

GL: That was one of the coolest things coming back from Rio in 2016. Up until then, we were kind of in this small rugby bubble. Going to the Olympics, you don’t realize how many people watch the Olympics and are supporting you. We got home and realized how many people were supporting us and cared about what we were doing. Training for the Olympics is so intense and it’s easy to put these blinders on and not realize the big picture. Coming home, I was quickly reminded about the big picture. Even after announcing my retirement, the number of messages from fans and supporters of myself and our team, you realize how big it is and how much it means too so many people. I always tried to remember that, especially in the last 5 years, there are a lot of people who get inspired from little actions that you do. It’s special.

Q: What would you like to see happen over the next 5 - 10 years to help the game continue to grow?

GL: I would like to see the financial support remain equal without constantly having to fight for it. That is something we have worked hard for, but I would love for the athletes now not to have fight so hard for something the deserve. I would also love to see the media attention increase as well. I have never met anyone who has watched Rugby 7s or Rugby in general and said, “that was boring.” Anyone who sees the game finds it interesting, so I would like to see more people have the opportunity to watch it.

For the team itself, I hope to see them continue to excel and have success on the world stage. I have seen these players train for years and years and I know what they are capable of. I am excited to see what the next generation will do.

Q: Looking forward, what is next for you? Do you plan on being involved with the game?

GL: I plan on being involved in some capacity. But for now, I am really happy being home and watching my daughter grow up and just getting to soak in all this time together.