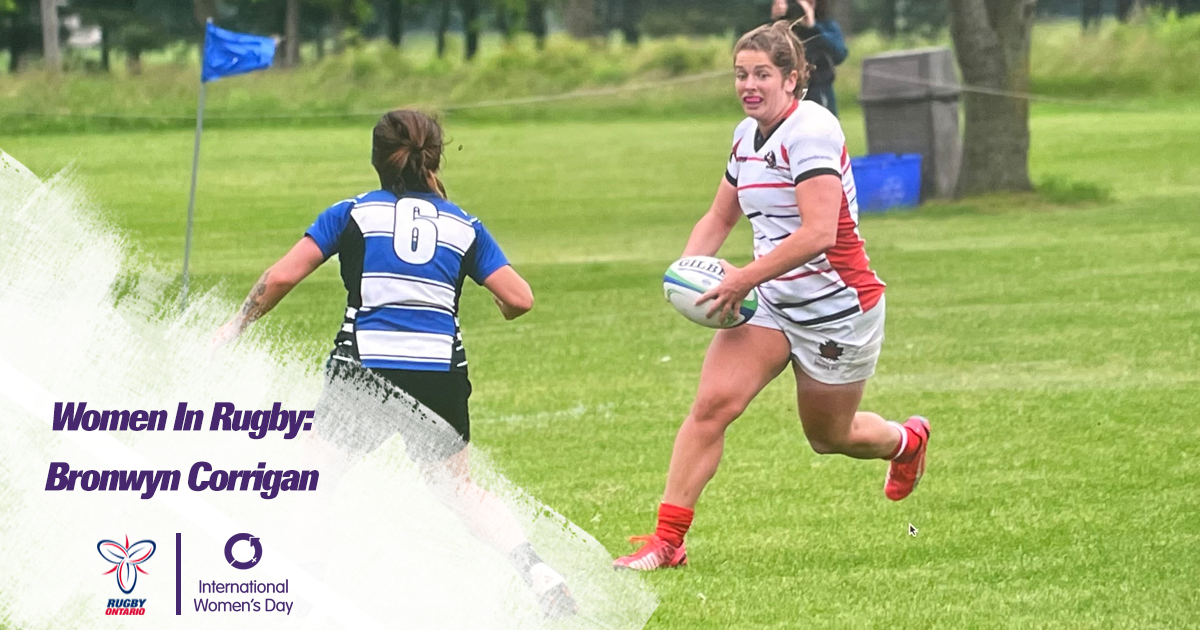 (WHITBY, ON) - International Women’s Day will be celebrated on March 8th, 2022. In the lead up to the day, Rugby Ontario will be publishing features on various women in the rugby community from all across the province who are helping to grow the game. Today's feature is on Bronwyn Corrigan! Bronwyn is a player who first started playing with the Kingston Panthers. After a summer with a club team, Bronwyn played for Queen's University, winning the OUA championship in 2013. She has played for six clubs across Canada and is currently a player/coach with London St. Georges and helped to establish the Mixed Ability program at the club. Read below to learn more about Bronwyn!

I was a soccer player growing up, and went to university intending to play on the soccer team. They had other ideas though, and I was cut pretty quickly! I still wanted to be on a team, so I went to the only sport still offering open tryouts, which was rowing. I rowed for the novice rowing team my first year of university. It was fun, but not what I was looking for in a sport. I'd wanted to try rugby for awhile so I joined the Kingston Panthers that summer, started playing for Queen's that fall, and never looked back!

Winning the OUA championship with Queen's in 2013 will always be a highlight for me. We were building for so many years, and Queen's had never won a provincial title. We won in my final year with the team, and it was such a perfect moment, getting to wrap up four years on the team with an OUA title, with my QWR family.

I love how friendly and welcoming the sport is. I had never even touched a rugby ball before starting to play at 19, and I couldn't believe how patient all my teammates were in teaching me the sport. I get it now, because I also get excited if someone new joins, it's obviously such a great game, all you want to do is share your love of rugby with newcomers! Rugby has always given me a sense of belonging and identity, anytime I move to a new city, the first thing I do is join a rugby club, and there is a built-in group of connections and friends.

I've been involved in sport since before I can remember. There's a few women who inspired me to get involved, and stay involved, with rugby specifically: Georgia Chamberlain was the first person who told me about Kingston Panthers when I mentioned I was interested in trying out rugby, and I'll always be grateful to her because I'm not sure I ever would have had the courage to show up to a sport I knew nothing about without knowing there would be one familiar face! Kait Pasic was a teammate who went out of her way to help make me feel welcome and explain the game to me, and helped me develop as a player. Vicki Wilson was a teammate and coach who encouraged me to try out for Queen's. Beth Barz was my Queen's coach who saw a lot of potential in me and helped me develop as a player and sparked my interest in coaching as well, which I do to this day. Overall, I've been extremely fortunate and I am very grateful to have so many females drive my passion and continued interest in the game. As I continue to play and coach to this day, I love running into old teammates and coaches anywhere I go!

What challenges have you faced as a female in sports? and What are some of the challenges women’s rugby continues to face?

Though there have been most fantastic experiences at the six clubs I've played for across Canada, there have also been some extremely disappointing ones regarding continued inequality for Women's teams. Disrespect levels have ranged from subtle, cultural indications that women are not as important or valued as men, to blatant and toxic disregard for the Women's teams. Some of my experiences include:

-    The women's team consistently being scheduled on the lower-quality pitch so the men can have the prime field.

-    Accomplishments such as the women's team winning a division being given a small shout-out at a post-practice social, when men's game results are heralded across the club's social media pages.

-    Men's teams moving onto the women's field during practice because they needed the lines for fitness tests they were about to do- the women were expected to use the men's field. No check in or ask, men's coach just started arranging cones on the field and told us they'd be about 30 minutes (different coach than the one who had the men run through our practice)

-    Women's games being moved to lower-quality fields when there has been a double-booking of the main game field.

-    Women's games in both club and OUA-level receiving sub-par officiation (also rare to have AR's, even at OUA), it is more common to see better refs and actual AR's at men's games

-    Women's teams being labelled as 'trouble', 'hard to coach', ‘difficult’, or ‘impossible to please’ if we bring any of these issues up.

I've experienced this in interactions with people outside the rugby community as well. I love the sport and the community of rugby, and am happy to see some shifts in the culture, but overall at the senior level I continue to see representations of rugby as first and foremost a sport and a hub for men. Seemingly small actions build up to clearly demonstrate club's priorities. Any one of these on their own would be annoying, but when they are everyday occurrences, you have to ask yourself if women's rugby is really as valued as men's. Many clubs will say yes, of course, but actions speak louder than words. I obviously love rugby and it's brought me so many opportunities, but despite a lot of growth, the community as a whole still has a long way to go.

What can Rugby Ontario do to help grow Women’s Rugby?

Offer more opportunities for women to feel comfortable and stay involved with rugby over their lifetime. I want to see more women staying involved in the game in a multitude of capacities, whether coaching, reffing, or playing. Creating mentorship opportunities and female-led coaching/reffing clinics for women just starting in these roles may encourage more of us to try out a new role in rugby. I believe this would result in more women staying involved in the game for much longer while also encouraging more females to come out and start playing. If they see females in these roles, they are more likely to seek out these roles as well.

How quickly women's rugby is growing in popularity. I'm so excited to see teams and programs popping up, providing choice for how women can get involved in the game. Senior club, women's flag or touch, and Mixed Ability teams are all becoming more common which is amazing. It's not a one-size-fits-all sport, so it makes sense that there are so many ways to get involved with the game and I'm seeing more and more women play because of it.

Just do it. It doesn't matter if you have no idea how to play. Rugby will quickly teach you to celebrate how strong you are (and trust me- you are way stronger than you think!) and your unique qualities, and that there is always a place for you. You'll bond with your teammates like you wouldn't believe, and you'll end up with a team who is more like a family. Rugby will be a part of you for life in ways you can't imagine yet. You'll be able to travel around the world and even if you don't know anyone, you can reach out to a club and be welcomed with open arms, with built-in friends and places to stay. It's so much more than a sport, it's a global community, so get involved and don't look back.

I see rugby being more built-up and accessible. It's still pretty common to have just one club in a city/region, if you're lucky. I know many players who drive up to an hour (sometimes more) to get to practices. I would love to see more rugby clubs developed, with multiple teams to participate on so no matter your age or ability, you'll find a home. Clubs would have program offerings from minis, juniors, Mixed Ability, senior, flag, touch, and old boys/old girls to be able to have something for everyone. I'd also love to see far more diverse representation beyond players- having a more diverse group of coaches, refs, organizers and members of club execs will help to create an even more welcoming environment for all.