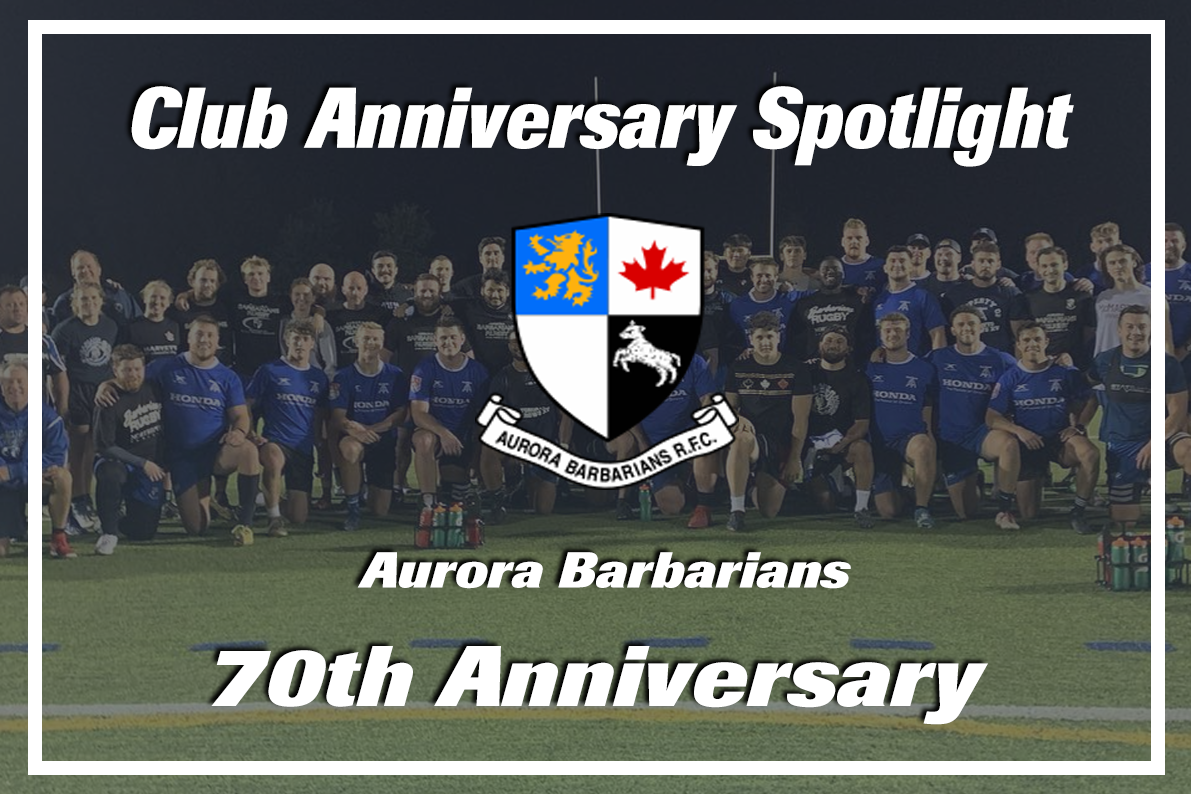 The Aurora Barbarians philosophy is “A Club for All” and have focused on developing and leading Junior, Minor and Women’s programs to consistently rank among the largest membership clubs in Canada.

In 1949 rugby was resurrected in post-war Ontario by a group of British expatriates who banded together to form the Wanderers RFC. The following year, the group launched an intensive recruiting drive for players and drawing together a total of 80 would-be participants, set up three additional teams based in Toronto including the Barbarians

On the pitch, the club fielded a number of strong championship Senior Men's and Youth teams in the 50’s 60’s,70’s and 80’s. After the merger in 2002, the Aurora Barbarians enjoyed a string of success at the Senior Men's level. The club captured five straight league championships, three McCormick Club Championships and made at total of seven McCormick Cup appearances from 2006-2013.

The Senior Women were a similar dominant group with three OWL championships from 2012 to 2016. The club has also seen success from their U-18 Boys and Girls program having won numerous Provincial Championships

The Aurora  Rugby Football Club (ABRFC) is the largest York region-based Rugby Club running programs for ages 6 to 66. We are proud members of Rugby Canada and Rugby Ontario.The ABRFC connects athletes from York Region, South Simcoe and North Toronto to run 15 different  teams. Our teams compete across Ontario from May to October and travel annually  to National and  International tournaments.  ABRFC were pioneers in developing  Youth and Women's  programs and are now launching a Mixed abilities program in conjunction with Rugby Ontario and the Town of Aurora.Our notable Alumni have captioned Canadian National, Provincial and Professional teams and held leadership positions throughout the National and Provincial rugby communities.

The ABRFC was established in 2002, after a very successful merger of two strong clubs, Aurora RFC and the Toronto Barbarians RFC. We are a community-based club centred in Aurora, Ontario.

The club practices at St. Maximilian Kolbe CHS and play their home games at Fletcher’s Fields. The Club supports: Two Senior Men’s teams, Two Senior Women’s teams Girls’ Junior teams at the U18, U16, U14 age groups Boys’ Junior teams at the 2 xU18, 2 xU16 and U14 age groups Co-ed teams at the U12 (modified contact), U10/U8 (flag) age groups.The ABRFC program focuses on fun and teamwork, all while working on fundamental movement skills and rugby specific skills. We accept new players at all age groups and encourage all players to remain with the club as they get older.

In rugby, no matter the age, rarely can one player take over or control a game. Rugby is a true team sport, that needs everyone’s participation, dedication, and teamwork in order to succeed as a team.Each age group will work on age-appropriate skills, with the younger groups focused on fundamental movement skills, such as running and catching and passing. As you get older the focus becomes more on rugby specific skills, such as scrumming and rucking. No matter the team, teamwork will always be a big part of the program.