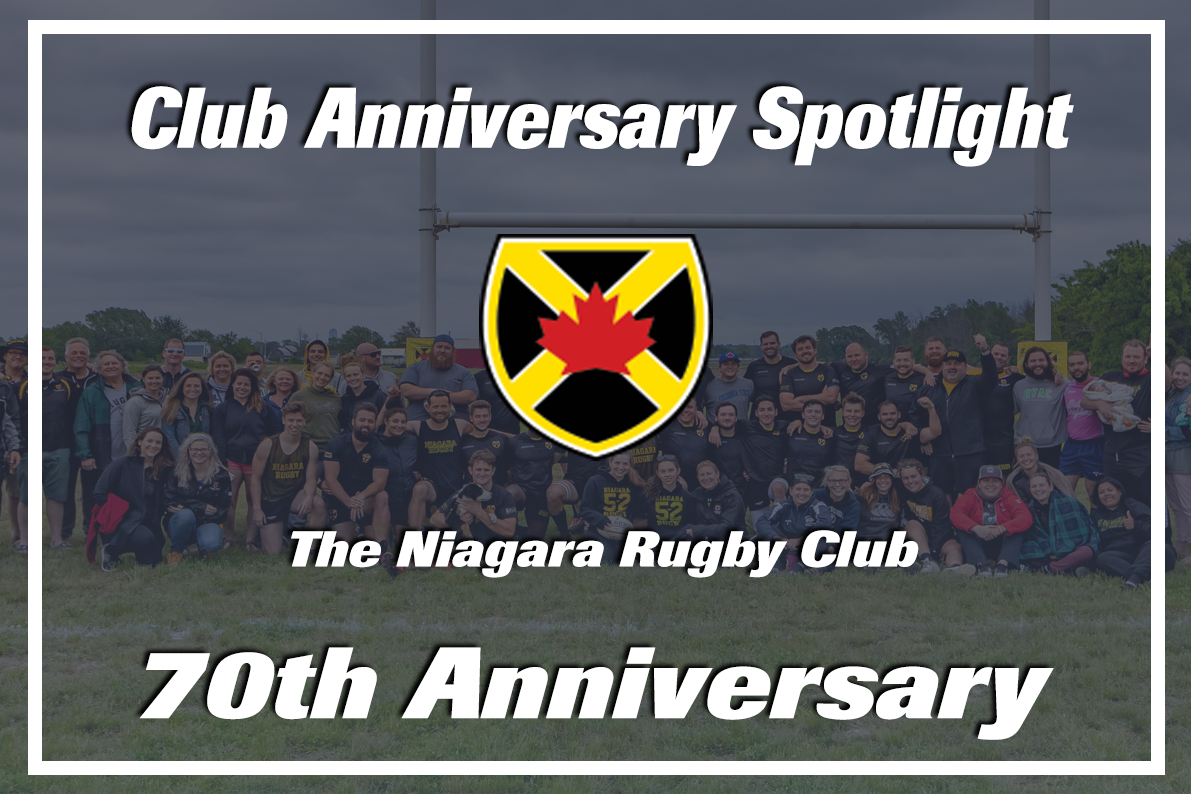 (WHITBY, ON) - The Club Anniversary Spotlight Series is a initiative which will recognize all Rugby Ontario Member Clubs that are celebrating a major anniversary during 2022. Next up in the series is the Niagara Rugby Club. The club is celebrating their 70th Anniversary!

The Niagara Rugby Club has been the home to the Niagara Wasps RFC for seventy years. As of 2015, the club welcomed Niagara Flag Rugby & the St Catharines Tigers RFC who were both looking for a more permanent rugby home base. The club currently fields as many as 16 tackle & non-contact teams, comprising of men’s, women’s, juniors, over 40s, touch, and flag rugby teams. By rights, there should be something for everyone at The Niagara Rugby Club whether you want to play, watch, or support rugby. The teams travel throughout Ontario & Western New York, and further for tours domestically and internationally. Thanks to the club’s proximity to one of the world’s greatest natural wonders, the club also host various international touring sides that make their way through Niagara. The club’s playing season typically lasts six to eight months, from spring to fall, and the club find ourselves playing in front of various crowd sizes at their own fields and grounds located at 1105 Barron Rd, Niagara Falls (in Thorold), Ontario. Beyond the traditional playing season, we have various athletic & social events going on year-round.

The Niagara Rugby Club is one of the region’s oldest sports organizations. As with most new sports teams, the Wasps were somewhat nomadic early on; playing our home games all over Niagara with stops at Niagara College in Welland and Oakes Park in Niagara Falls to name a few. However, the club were very fortunate to have some forward-thinking club members that jointly purchased some land in Port Colborne in the early 1970’s. That allowed the club to have a permanent home for the next 40 years. In this time, the rugby team became a club for various rugby teams for men, women, boys and girls. For many club members, the Port Colborne rugby park was a home away from home which held many cherished memories both on and off the pitch. However, in 2012, Wayne Hodgson offered the club an opportunity to purchase 11acres of his farmland on Barron Rd. It had been a goal of the club to find itself a more central location in the Niagara Region; ultimately, the club voted to make the move to the Niagara Falls & Thorold boundary. Over the last ten years, the club has undertaken the process of developing the farmland into two full-sized international rugby pitches, three mini-sized flag rugby fields, and a two-story observation deck that overlooks the entire park. In 2014, the Niagara Wasps officially opened and started practicing and playing their games at the new rugby park. The following year, the club welcomed Niagara Flag Rugby and the St Catharines Tigers. The club posthumously renamed their new home in 2019 as Wayne E. Hodgson Park in honour of their past president, long-standing club member, and benefactor. With much of the club development well under way or complete, it is now time to build the new clubhouse. See Future Club Goals for plans for the new clubhouse; fundraising is well underway and if you would like more information email president@niagararugby.com

The club would like to acknowledge the many 100’s of volunteers & executive over the years that tirelessly help coach, support the rugby operations, host visiting teams, tend to the club & grounds, and/or pitch in wherever was necessary to make the club the premier location for rugby in Niagara.

The Niagara Wasps RFC is pleased to support various annual charity drives each year on behalf of Project Share, Family & Children Services Niagara, Kristen French Child Advocacy Centre, as well as many other good causes that the club can take on as needed. The club is pleased to host various coaching clinics, match official training, and development sessions throughout the year.

The next step in relocating to the club’s new home is building a new clubhouse. The club expect to offer change facilities for players, coaches, match officials, strength & conditioning gym, medical treatment & recovery rooms, administrative offices, executive meeting areas, and most importantly a grand hall for hosting guests complete with food & beverage services. With the aforementioned plan on the horizon, The Legacy Fund has two primary goals:

1.    Build a new home, a year-round clubhouse to allow the club to properly host club members & teams, guests from all over the world, and future sports entertainment events.

2.    Continue the proud legacy, by setting up an annuity fund that will help financially support The Niagara Rugby Club in perpetuity.

The goal is to sell 1000 ceremonial sponsorship bricks at $1000 per brick to friends & family, the rugby community, supportive local businesses, and to municipalities in the Niagara Region. This is a unique one-time request, as for over 65 years of existence, the club are proud to be a 100% self-sustaining sports organization. Thanks to many current and past members & volunteers, the club have procured their own land, they develop their own park, and take care of the club & grounds. The club will be budgeting $500,000 to build the new clubhouse superstructure, open air observation deck, and access bridge that connects the two. The remaining $500,000 will be kept in a low-risk investment fund where only the interest is accessible for maintaining the clubhouse & grounds and supporting the club’s rugby operations.

If you are interested in supporting one of Niagara’s longest standing sports organizations; please contact the club for a pledge package.

Various promotions to the OWL for the Senior Women