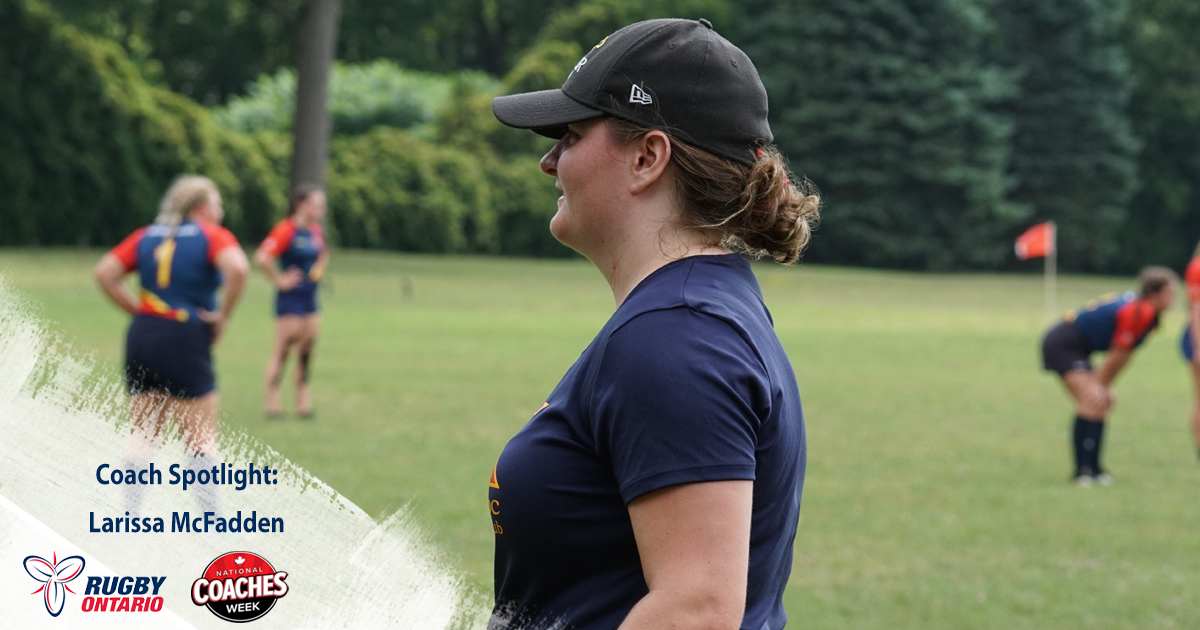 In celebration of National Coaches Week, Rugby Ontario is profiling volunteer coaches from across the Ontario rugby community. Our spotlight focuses on Larissa McFadden!

Larissa coaches multiple teams for Kent Havoc RFC. She is one of the coaches of the Senior Women's team and also coaches the U16 Girls team. Read below to learn more about Larissa!

Through my grade nine English teacher, Mr. Morkin. I can confidently say that I had no idea what rugby was. I was confused, like many, about how the sport worked. For example, being told that you can’t pass the ball forward, and can only be brought forward through running or kicking it confused me so much. However, before the high school season ended, I was in love with the sport. I am so thankful to both Mr. Morkin and Mr. Phaneuf for showing me the sport and for my parents for not understanding the game until after I fell in love with it and not being able to pull me out.

There are so many to choose from, it’s difficult to pick one. I think it would have to be making Rugby Ontario u18 team in 2017. I was very unsure of how I would compare to everyone that was trying out for the West team. I was worried about every little aspect of my game and if one mistake could mean that I did not make it. However, the coaches there made me feel confident in my abilities and I was picked to go to Kingston for all the regions to play each other. I was not afraid to play a position I had not before and the coaches knew that I was able to be put anywhere and be useful. Getting selected for this team and being able represent my province at the Canadian Rugby Championships was such a wonderful experience and something I will always remember.

What do you love most about the sport?
Everything. Specifically, the support system that rugby is. You see this on and off the pitch, within your local club and internationally. On the pitch, you know that you have help, you’ll have someone there to support your run, help push you in rucks and in scrums. If you need a ride, forgot socks, or need your hair done, you know that someone will be able to help. If you go travelling, you know that if you bring your boots, you will be welcomed at clubs across the global because of the spirit of the sport. It is truly something special that is hard to find anywhere else.

What made me want to become a coach the most was showing the coaching space is no longer an ‘old boys club.’ I wanted to step into a space that traditionally is not necessarily welcoming to all. To be in a space with others that have shown that everyone is capable of thriving in it. You see now how more people are getting opportunities to coach and are proving that they were selected because they are the best. I think that it’s also great for athletes to see coaches that are like them. For many, it can take years before they see a coach that is like them. I think that being that and uplifting other coaches will help the coaching space to become less bias and more welcoming.

What role have mentors and mentees played in your coach development? Anyone you want to give a shoutout to?

Mentors have played a significant role in the reason I became a coach and my development. I think that through observation, you see different coaching styles. One coach can have different styles depending on who they are coaching and I think that’s something that is learned through years of coaching, and really cool. Especially when you’ve been coached by someone for a few seasons, you see how maybe they’re style as changed or stayed the same. There are many coaches that have helped and that I look to shape how I coach. These who I’ve played under include Scott Morkin, Jeff Phaneuf, John Weller, Meghan Hart, Kate Pasic and Brian Hall. Those who I wish to meet and pick their brains are Rocky Clark, Simon Middleton, Kevin Rouet, Amy Turner, and Saiasi Fuli.

In my short coaching career so far, the biggest challenge that I have faced is balancing wanting to be personable to the athletes but also having to be an authority on the pitch. This past season, I helped coach both our U16 girls and our Senior Women teams. With the U16s, it was not as difficult to set that boundary as I did not know many of them. So, I did not feel as guilty in setting that boundary. With the Senior Women, it was more difficult as a majority of them are around my age. I played in high school with a majority of them so it was difficult to tell them what they needed to do. However, they all have a vast knowledge of rugby, and of sport in general, and understood that I was in a position of being able to analysis what was happening. I wasn’t just telling them to do something because that’s how I would have done it or that I think I’m smarter than them. That was never it. It was, from the touchline, this is where I’m seeing us break down or this isn’t working, we would all agree and I would just be reminding them of key factors to focus on. Finding that balance of friend and coaching I think will always be difficult for myself but will become easier in time.

Seeing the look in the athlete’s eyes when it clicks. I think that when the concepts click, it just makes everything great. I am not sure how to exactly to describe the feeling. At best, I would say that it’s a mixture of relief and excitement. As a coach, it makes the weeks practices stand out. You may have done a different drill or it was just a unique way that the skill was explained. Which ever one it is, that feeling that of it finally connecting and being used on the pitch is amazing. You also see how happy the athletes are. They have realized that another skill or that they have upgraded a skill. Especially when they weren’t understanding it at the beginning, it helps them to realize that they have become that much better.

How have you changed as a coach over your career?
Since I only started coaching in the past few months, I am still trying to find a coaching style. However, I am excited to grow as a coach and evolve my style as I grow.

What have you learned during the pandemic that can help you grow as a coach?
Engagement is key. You need to ensure that the spirit of the club and the team stay alive. You need to make sure that people want to come back because it’s as fun as they remember. If do not tend to a program, or keep it at the forefront of people’s minds, it will get forgotten. You need to make sure that everyone is having fun, or people won’t want to come back or bring a friend. When you have a fun environment, you ensure that people are learning and growing.

What would you say to someone who is considering getting into coaching?
Get involved. Coaching is such rewarding work. Even if you aren’t sure you want to take on a lot of responsibility, just being recognized as a coach means that you can help your club. You become another person that the club can rely on and it helps to lift weight off of other’s shoulders. The other wonderful thing about coaching is that no matter where you go, you could coach there. As long as you have the certification, you are good to go.