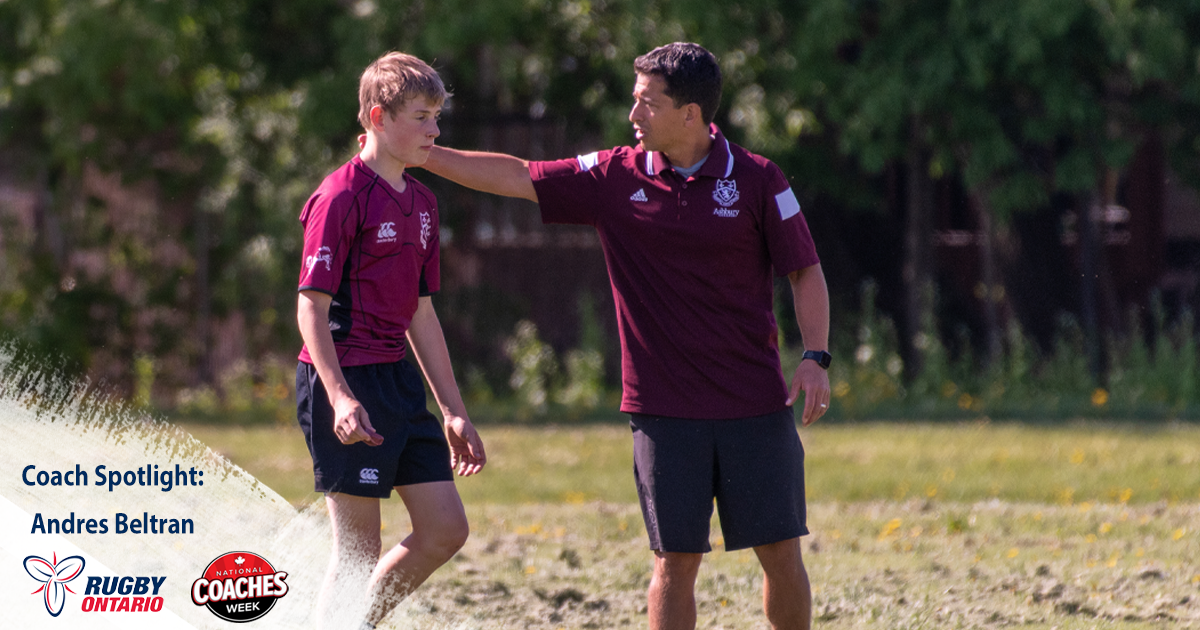 In celebration of National Coaches Week, Rugby Ontario is profiling volunteer coaches from across the Ontario rugby community. Next up in our Coaches Spotlight Series is Andreas Beltran! Andreas is a coach who is part of the Eastern Ontario Rugby Union High Performance Program coaching staff and also coaches at the club level with the Bytown Blues. He also coaches Ashbury College at the high school level. Read below to learn more about Andres!

I started playing at my high school, Ashbury College, in grade 9.  My father who was born in Colombia, moved to England at a young age and played rugby all through his schooling career and into University.  It was through his introduction to the sport and my school team that I first got involved with rugby.

There are so many, but one has to be when we took the Ashbury Rugby Team on tour in 2007 to Wales and Ireland and had the opportunity to play against my old club.  In 1998, I had the good fortune of playing with Llangennech RFC (located just outside Llannelli, Wales) for a season and taking our high school team back there to experience a bit of what I did was so much fun!  I felt like a proud dad taking my boys to get a taste of the local rugby, the culture and the wonderful people.

My favourite thing about rugby is the camaraderie that you feel with your teammates, the coaches and all the amazing rugby people that you get to meet when you are involved with this unique sport.  I have played many sports growing up and there isn’t one out there like rugby with all that it has to offer!

The opportunity to give back to the sport and pay it forward when it comes to introducing, supporting and teaching the skills and ethos of the game.  Not to mention, coaching is a perfect way to stay involved and up to date with changes and the current game.

What role have mentors and mentees played in your coach development?

Anyone you want to give a shoutout to?  I think that my mentors have to include all my teammates who made me better every game.  Obviously, all of my coaches played huge roles as a player and then ultimately as a coach.  There are so many mentors on and off the pitch, but some who come to mind are: 1) on the player front -  I would have to thank Scotty Armstrong who took me under his wing as a scrum-half and showed me the ropes, as well as Patch (Chris Taylor) and Heavy Kevy (Kevin Smith)  2) on the coaching front – I have a lot of thanks to give to Jim Nordin, Mike Fisher and the late Doug MacDonald (Bytown Blues RFC), Paul Britton (Ottawa Harlequins) and of course my good friend and colleague Ian Middleton (Ashbury College)

Many challenges present themselves every game and every season.  From the proper personnel/player selections, best practices when it comes to effective teaching of skills and tactics, to ultimately hoping that you are doing a good job of turning players onto the sport and doing this great game of rugby justice…!

It has to be the interactions with the players!  Watching their understanding and appreciation of the sport grow, while observing the improvements in skills and ultimately being able to witness the huge amounts of personal confidence that occurs within players on and off the field is so rewarding.

How have you changed as a coach over your career?

Earlier on in my career when I was unmarried and didn’t have kids, I had all the time and energy to put everything that I had into my coaching.  My level of competitiveness as a coach still remains the same now that I am a family man, but I think I put a greater effort and emphasis into ensuring that my athletes respect each other and the sport, learn about the positive and inclusive rugby culture that exists and ultimately become confident rugby players who play for the love of the game.

What have you learned during the pandemic that can help you grow as a coach?

I have learned not to take things for granted.  So much turmoil, pain and loss came during this time, that I have learned to appreciate what we have. When it comes to rugby, I have learned how lucky we are to have such a supportive and open rugby community to allow all types of players the ability to get fit, learn lifelong lessons and make enduring rugby and life memories!

What would you say to someone who is considering getting into coaching?

I would tell them the same thing that I would tell someone who is considering having a child… it is a bit more work than I thought it was going to be, but it is also way more fun, empowering and more special than I ever thought it would be!

I would like to continue to be part of the solution when it comes to bridging the gap between school rugby, club, representative and national level rugby and ensuring that all athletes stay involved in the sport and are offered the opportunity to continue to play and challenge themselves to play at the next level, whatever that means to them.