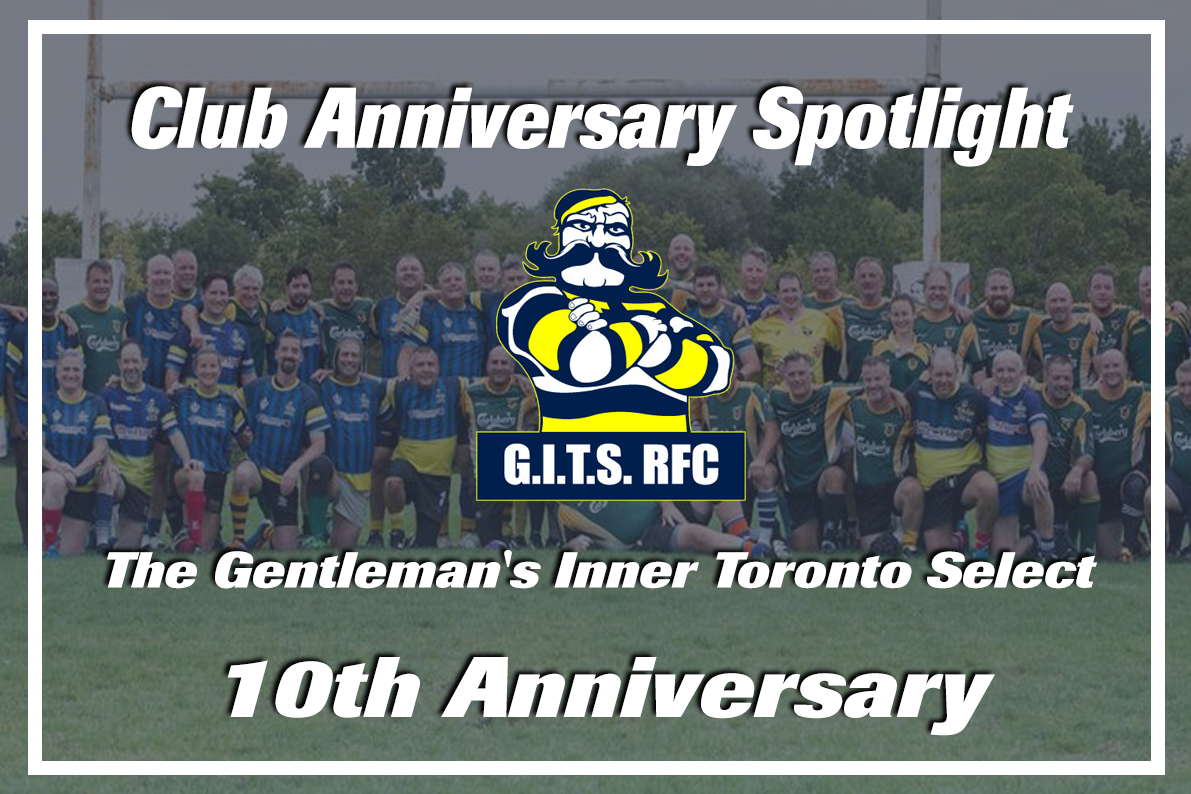 (WHITBY, ON) - The Club Anniversary Spotlight Series is a initiative which will recognize all Rugby Ontario Member Clubs that are celebrating a major anniversary during 2022. Next up in the series is The Gentleman’s Inner Toronto Select (The GITS) who are celebrating their 10th anniversary!

The Gentleman’s Inner Toronto Select, otherwise known as The GITS, was founded in 2012 as an over 35 old boys club for the Toronto area. After a bunch of old boys made the weekly trip to Burlington to play in ‘All-Comers’ games with the Nobs, The GITS looked at each other and realized most of the players had come from Toronto, from teams such as the Scottish, Welsh, Beaches, Lions, Saracens, and others.

The first question was “Why doesn’t someone organize us all so that the Nobs come to Toronto, rather than us travelling every week?” The GITS knew that this would require someone who was happy wasting their time trying to herd cats. Step forward Ray “Boyo” Hopkin, who was proudly proclaimed the person they were seeking!

The early development period of the GITS was interesting. Ray Hopkin, James Walker, Rob Lee and Dave Mercy, along with the late great Craig Morley from the Nobs, developed an ideology of creating a ‘community’ of old boys, rather than just a club. They reasoned that if the GITS appealed to all rugby clubs in the city, they could get four or five players to join from each club, forming the basis of the team. The goal was to create an atmosphere where a bunch of old boys could get on the field, play anything from 10 to 60 minutes, and then enjoy the social afterwards.

The question of where the social would happen was soon answered. Boyo and Len Cherry went on a pub crawl along the Danforth, where they met bar owner named Merv, who was in the midst of selling the bar they were sitting in, and buying another one at Woodbine and Danforth. Merv said, if we could be his first customers at the new bar, he would pay for a new set of jerseys. Ten years later, both the GITS and The Kilt & Harp (2046 Danforth Ave) are celebrating their anniversaries together, with a night of karaoke, and still sponsoring the team!

Ten years on and the sense of community is stronger than ever, with players from all over the world, each one stepping up to help in any way they can. The GITS have helped a local elementary school get laptops into the classroom, and took to social media to raise awareness for organ donation. The GITS travel across southern Ontario to play. They have won the Goldenrod tournament in Cobourg, and were the first team to play Peterborough at their new clubhouse in their new location. They’ve played in Oshawa for the Scotty Stephenson Tournament, played against the Markham Greyhairs with Jason Currie, and played against The Chambreys.

The GITS pride themselves on being a competitive, fun community of like-minded old boys. They appreciate that getting out on the field, enjoying the game they have played for many years is far more important than the score at the end. This is demonstrated by the willingness of players to go across and play for the opposition when some of their players need a rest, or are short players!

The GITS have a good core group of players this year, being run by Boyo, Mike Gorman, James Stracey, Jason Currie, Steve Bett, Dave Mercy and Craig Sofley, but they are always on the lookout for new players. The older the players get, the more breaks they need in a game! The one disadvantage to an old boys team is the club can’t develop youngsters, so they have to hope that as players get into their 30’s, that yearn for a game of rugby against other old boys, and not against the ultra competitive 20 year olds!

It’ll be nice to still be playing 10 years from now!